Named after a the legedary rock band DIO. Dio is a lazy momas-boy who enjoys all luxuries availiable. When disturbed he screams loudly his rock tune.

At the age of four weeks he starts to show wis explroing nature and enjoys to play mutch.

At five weeks Dio is almost hypnotised when caught to the lap for cudling. He loves the attention.

Dio at 6 weeks. At 7 weeks he has begun to show how mutch of a fighter he is. He is the biggest of al the kittens and continues on playing when siblings get tired and rests. 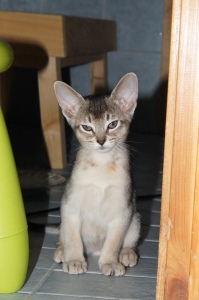 At 8 weeks he shows skils of a great hunter and still enjoys the domestic life in the lap of his human.

At this picture Dio started to play with my fingers but in the midle of play he suddenly got tired and begun to sleep with my finger wigling in his mouth.

It seems as if he regularluy fals in to trance with a finger in his moutch.

Here is another typical pose of Dio who enjoys a cozy busum.

Dio as an adult.