I got ”kidnapped” literally with my pants down at own cottage by my bachelor crew. 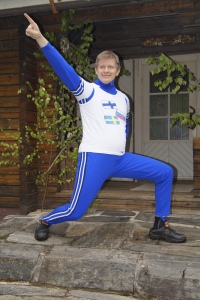 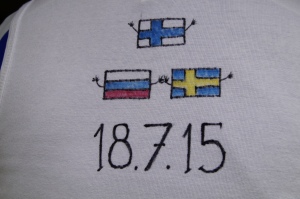 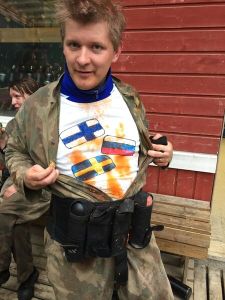 Here we started our journey. combined two fields together. Obstacle field with the forest field. I got a ”Nancy Gun” One had to pump it to reload while doing so you lost your aim. As for a single shooter it was extremely accurate and I was able to shoot in between a narrow gap with high accuracy. The first game I got good position but my barrel got hit, the two second rounds I fell out quite fast.

Almost happy to hear I was going to get an electric machine gun for the next round. Unfortunately it had taken some moist damage and was malfunctioning. I got an other rifle able to swirl behind corners. At least it shot rapid fire. This time I was ”immortal” with two mortals defending a building. If holding for 12 min we would win, if I surrender game over. The fist half period was easy to hold even thou our defensive strategy was a bit faulty but so was the attacking strategy as well. When my wing men dropped I was left alone to defend the building against even bigger horde. I tried to circulate but ammo ended so I filled up in all calmness. During that time the offence got close and got me cornered from multiple angles. I felt the hits at close range and took out the first attacker. I was regrouping downwards to the center of the building and met by another foe at the stairs. He held of my barrel and shot of a clean series on my legs at close range. I bent up the gun and took him out with a belly shot. I backed back back up and got more hits on my shoulder so I regrouped to another hallway followed by a hail of paint balls. My passage in was blocked and mask was completely fogged up and messy. I tried to find my way down the stairs but stumbled blind. I was pinned down between the stairs and the corner of fire, with no way to escape. I tried to brake free the way I came from but the enemy was holding strong. I could charge but completely blind I would be knocked out by any obstacle if attempting that. I shot blindly from the corner. And when realising it was futile, I couldn’t determine where the shots came from so I had to admit to defeated.

The next round was similar but  I got one more mortal wing man to defend. Now the both teams was wiser and we held of quite well. The wing who was furthest away had an easy defense line. But when covering up a regroup at adjacent sector during that time his slot was filled with enemy who got behind his back and took him out. Not match sooner the second wing man was announcing his path to strenghten upp the gap but was shot down by friendly fire in the back. I was holding the other end and when it rained paint I was clearing the attacker away when my gun spinned empty. With limited visibility it was impossible to fix the problem in open field. I fired of a few empty rounds to scare the attacker away. This time I had one wing man left with me, I was heading to exact same situation as I was in previous game. This time I decided to carefully descent the stairs on my four with my fogged mask. I knew of a dark corner where the enemy would not see me. I went there with my broken gun and tried to fix it. My wing man was asking for me but I couldn’t expose my position I only shouted I was fixing my broken gun. At that time i realized the hopper had fallen of. Time was almost out and the victory near. My plan was to get the enemy to chase and shoot each other out while searching for me in the building. I could hear the enemy searching behind the wall. Unfortunately two attackers had their way through my hiding. They could not see me but if getting thru they would touch me so I shot an empty scare shot as last mean of defense. With two barrels against my head they kindly asked if I would consider to surrender. They were quite persuasive. Defeated once again.

The last game was in a city environment and i finally got an ordinary gun wit a little bigger hopper. The last six games at that field went good. Some hits and many kills. At the last game my shots run out so I had to operate as a decoy to smoke out the last of opposition. I got the flag and called my troops to come closer to spot my killer. Then I made an attempt to place the flag on enemy stronghold. I got shot and my killer reviled his position resulting in in his end shortly after.

Quite good games. I will definitely acquire my own set of gear and if not building own practice range then signing up for the next years ”Big Games” at Jämsä Paintball field.

The evening continued wit Finish Sauna and grilling food at the fireplace long in to the night.

The next morning it would be American Football practice. 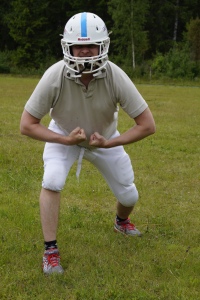 My wife was completely unaccepting the upcoming event when I dragged her away to ”eat Ice Cream” by Orivesi Railway station. From there her bachelorette party begun with a motorcycle ride. Thereafter followed by Frisbiegolf. Rest of the evening was filled wit spa pampered evening, drink and good sushi. The day after she was released at Wästilän kesäjuhlat. 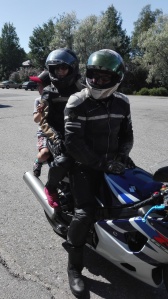 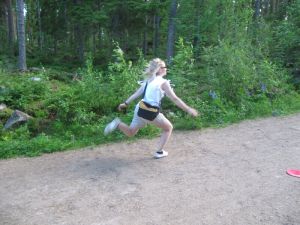 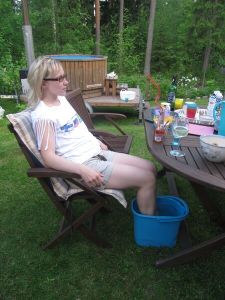 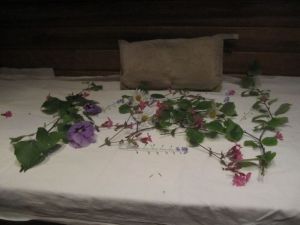