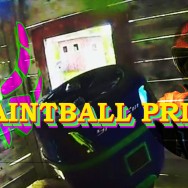 The first set of games was played defending the castle. First match we was defenders holding the fort. I had my Empire Ttracer pump.

As defender I took my place holding the flanks. I was sufficient in doing so. My pump experience was not as sufficient. I delayed paused exactly at wrong moments and when hitting the spot my aim and accuracy was failing. I basically gave the opponent free entry to our 7:00.

My nemesis could not pass me but unfortunately he had so good spot to flank our windows that my teammates went silent. I realize the situation and needed to multiply forces. I needed to abandon my stronghold and try to surprize a few attackers. My noob skills and pump against another with e-gun, ods are not in my favour.

As I am circling around to cover my flanks. I see some movement by the house and rush to bunker that guy. He is not lazy resting behind the wall and is long gone as I get there to blast his as of. In that moment I see another player who sees me. I couldn’t manage to pump him out of game and he got into cover. Now I have three active fronts to deal with.

I can not pop up above the wall as my left is sniping me. My right side has long way to reach the castle corner why it is pretty calm for the time being. My front is protected by the castle.

I don’t want to go inside as I would be vulnerable to multiple windows simultaneously with little possibilities to resist. They can’t synchronize a charge on me as they are so wide spread so I attempt to do my best. Snapping thru the castle and holding the back corner of the castle away and hindering the left player from advancing as there are no bunkers in between his spool and my protecting wall.

Unfortunately I have no grasp of my profile. Opponent catches my knee pad wit a bouncy ball. I recognize the bounce but realize the game to be a loose why I wpare myself from unnecessary bunkering and call my self out.

In these following games we play Team death matches and I switch to my Phenom XVR as the opposition is so tough. The first game I go to left corner and attempt prevent opponent to reach their bunker cottage. For a while I am locked at back corner but can advance to our cottage wall. I read the situation to be calm enough that I manage to slip inside our bunker cottage. Unfortunately well inside, I am relying mainly on the stealth from darkness and don’t realise to utilise cover to minimize own target area. That is how I end up catching cover fire for another who pushed up to our cottage. Well by our side he managed to flank the rest of our team.

In the next game I delay for a second and double team the closest spool to my left side. I myself would paint down the gap between the spool and cottage why Istop by the spool and draw the right side opponents attention to the me. When the rain from my path forward stops I rush to the cottage. Unfortunately I was careless and presented my ass to be shot at by the tapeline. I guess I assumed snakeside opponent couldn’t be prepared yet why I felt the freedom of movement justified. My team fought valiantly and filled skilfully my spot. But experienced players prevailed and could outflank the remainder of us.

The last stand was quite interesting as opponents had all the cards in their hand. As they charged. The opponent dropped his gun posture and lost his stealth as he was caught by surprize by our last woman in game. She stopped him right on his tracks but could have aimed with accuracy instead. She got bunkered from behind in the end.

In next game I double team left side and my double gets clipped from the start. Opponent gets a foothold in a very good stronghold.

Once a gain I am stuck by Hybris. I know I should bump up one step at a time but somehow the small bunker between me and the cottage does not appeal to me. I believe I can’t make myself small enough in a crossfire why I continue on to the cottage and catch paint. My recklessness opens up a huge push from the left side and they capitalise on it. Opponents flank us with great success.

These games started with me delaying in low profile in the middle and reading as if the right side needed my support. AsI reach snake side cottage I spray opponents from reaching mirroring cottage. Usually I avoid windows but one player who likes to play these windows was not playing today. This gave me some more angles to work with. As I snap out thru the window I paint where I expect to find opponents. But as an opponent comes into my scope I fail to capitalise on it and he escapes me.

Then I lay my focus on crosfield and manage to prevent one player to reach the bunker side cottages. I haven’t heard shots from their bunker cottages but I still play cautious as the windows can be occupied at anytime. I am occasionally flipping sides only to prevent snake side from free access to our flanks.

We managed to get a player inside our bunker cottage. Now we are set to fight good. A fourth member comes to strengthen the middle but gets to be played out.

As I discover our bunker cottage is played out of the game Our left. That side becomes completely vulnerable for flanking moves. I try to advice a noob to go to cover that corner but the endeavour takes far to long. I myself can not do that as I am so far away and have a good spot to support her advancement.

As she goes of I lay paint in between the open gap between bunker cottages so no one can bunker her. Unfortunately the opponent has already reached our side and had me in the scope thru the cracks of our cottage. As he snaps out to shoot me he gets the both of us in the same lane and that is the game.

In next match we try to use codes. 100-1 for one enemy down and 10-1 for one of own down. From start I went to closest spool and sprayed lie manyack hitting nothing.

Oyr left flank gets clipped and they manages to get into their bunker cottage. I spray him down and as he is passive I figure out I can make it safe to the snake flank cottage. There I have better angles against bunker cottage a but snakeside player catches my eye and I stay prone to shoot at him. If he attempts to take any further snakeside tapeline. As an experienced player he offered very little to shoot at when he was securing the tape line. Thus wasting my element of surprise. We engage in a snap shot duel wich I naturally loose. I could have focused only to hold him of by snapping out les frequently and doing so he would not be able to push up and would need to engage midfield as well in order to maintain game efficiency. In this case the prolonged battle would have gave my team the possibility to gain better ground. As I lost this duel the flank became free for the opponent to capitalise on.

Our left flank is still in game and manages to get into the bunker cottage. Unfortunately they are spraying it in why he couldn’t survive in there and we lost.

In this series of games I initially charge to the right and manage to paint of a player reaching their side bunker cottage. I stay prone at a wide angle as to lock opponents away from the cottage and further access to the field. Some how they manage to trow some paint to my location why I decide to survive rather than challenge the odds and flip down to the small gap in between the tires. The gap is easy to defend from and difficult to hit from far away. Unfortunately my field of sight becomes compromised and I can’t be sure if they breached their bunker cottage or not.

At one point I recognize our left side is compromised and try to protect my flanks. I am planning to go inside the cottage but the mirroring player paints me from accessing the dorway. As we are about to get run thru I rush behind the cottage despite the gap between the tires and cottage. My mirror couldn’t catch me but the crosfield player plants a nipple hit to my chest.

I have only a few times felt such pain, once in my armpit and another time being bunkered to my ribs. Those times I was able to shake it of within a few minutes but this time my niple was aiking for three weeks.

In this set I stay relatively in the middle and see our bunker cottage to be shot out and next teammate filing it up. My right side drops out and the left side is almost open so I relocate to hold the house corner. I saw only one player getting to their side of cottage why I mirrored his move. I was not expecting that side to have 2 players. As I was engaging my mirror the guy in at the tires has a free shot at me and I am out.

The last game I am only filming rather than playing. The other side plays it conservative as this side players take the field wide and deep. Left side drops of as he presents his weak side entirely in order to get his shooting side active. The far side can now run thru the tapeline all the way to baseplate but chooses to play out the last player.

We have two players inside the bunker cottage one is played out and the last one attempts to surprise his opponents. Unfortunately also he plays it from his strong hand thus prematurely exposing himself for fire.

That’s all from the games from The PRIDE day

I know I am a poor shot. Even if I practice accuracy thru 10 cases my first shat will still land as accurately as the las one. The motivation to shoot on spot is not there by volume. However with pump you get to practice the proper motivation. You want to shoot on spot with the first ball.

For me to take out players I need to flank and bunker them. If I can’t do that I will still be a valuable member suppressing opponents advancement, stalling time, locking areas down etc. With some more practice I will be able to communicate better what is happening. I did however read the game play well and had some level of field awareness. That will improve with time and experience.